Sentiments, Stems and Flower Tops at The Cutting Cafe 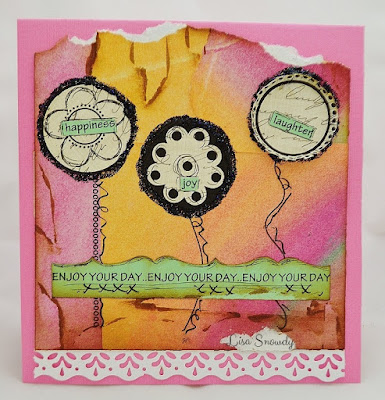 over at The Cutting Cafe and I know I say this a lot but this is a very versatile set. That's because Regina includes great options in any set she designs! You can mix and match the stems, with sentiments or without, and the cute flower tops come in two sizes. Simply punch them out and add to your stems. I went a bit further and added doodle rub ons for a whimsical feel and printed my flower tops on a text designer paper for fun. I printed the sentiments and fussy cut three words to add to the flower tops then I trimmed another long sentiment and added it to my card. A punched MS border adds another floral touch and wraps my card.

To see all of the great options you can create with this printable stamp set visit TCC's blog on the 21st. If you leave a comment on the design team post you'll be automatically entered in a drawing to win 3 FREE sets from the Cafe. Winners will be announced on the 7th of March. :)

where Regina now offers acrylic clear stamps and more. You can see some amazing inspiration on the blog by the design team so click now to be inspired. There's always something going on at either of Regina's online shops because she's one creative woman. Aren't we glad!

My hubby and I have been traveling a lot this year and we're looking forward to spending the next two weekends at home. I think I'll prepare one of his fave meals tonight - homemade pizza. Dinner and movie sounds like a great way to kick this weekend off.

Have a wonderful weekend, wherever you are!
Lisa
xx
Posted by Adventures in Paperland at 12:50 PM 4 comments: 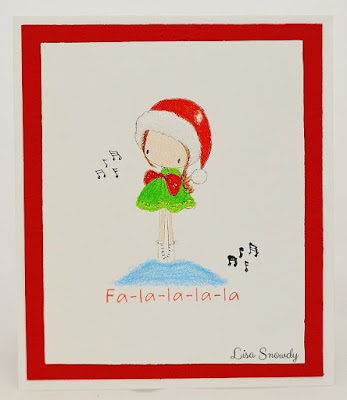 D for Don't Overdo It!

This is our new challenge at ABC Christmas Challenge. We're looking for projects with a minimal touch (meaning keep it simple) and it needs to have a Christmas theme, as always. Our sponsor is All Dressed Up Stamps and I chose to use the 3 Little Christmas Girls digital image and only one girl from the sweet trio on my CAS style card.

Prize is 2 FREE digi's of their choice.

To see all of the inspiration by the design team visit the ABC challenge blog. If you enjoy making clean and simple style cards this challenge is for you and we'd love to have you join us.

Thanks for looking, have a great day!
Lisa

Posted by Adventures in Paperland at 1:30 AM 7 comments: 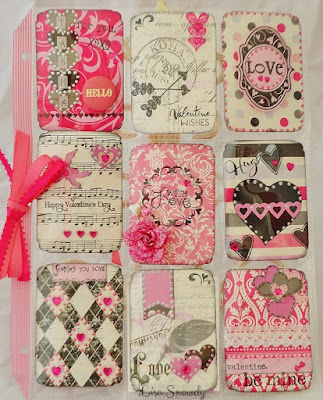 Hello everyone, hope all of you are doing well! I've taken a bit of a break from crafting and blogging lately to catch up on several things including some much needed rest. Most of the pocket letters I'm sharing today were arranged for swaps back in December. I'm not one to renege on a promise so I created a flurry of these last month for mail out at the end of the month. There's a total of 5 with four going to US pals and one going to my new pal in the United Kingdom. In fact the one above went to Natasha and she hails from Royal Windsor in merry 'ole England. Her pl features one of my favorite paper collections - Be Mine - by Echo Park. It's been in my stash awhile and that's because I tend to use it sparingly. The papers are so pretty and I love the color scheme of pinks, grays, black, cream and white.

She goes by Tasha at PLP's so I spelled it out on her greeting pocket. A mixture of Verve stamps and die cuts were used on each pocket.

The cupid (left pocket) is a punch and the row of small hearts on the far right pocket is a die border by Taylored Expressions.

I also used a Fiskar's heart punch, heart shaped gemstones and liquid pearls to dress up my pockets. So happy Natasha likes her pl and that we've agreed to swap letters again!

The next pocket letter is different in style and it went to my new US pal, Cherise, in Michigan. 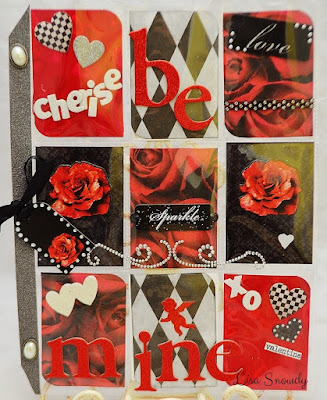 I used 4 different papers on this pl-metallic hearts, diamonds, roses, and black foil. It was hard to photograph but in person you can really see the detail of the foil paper. A few years ago I picked up a box of chip and glitter elements and I used several, including the tag on the spine, on this pl.

White glitter thicker alpha's spell her name and I used two chip hearts on her greeting card. Another chip can be seen on the 3rd pocket and I added a band of pretty trim. For the middle pocket I spelled out "be" using the pretty glitter alpha's from a Twilight chipboard collection. Not a big fan of the movies / books but it included some great pieces I knew would come in use someday.
PS, no offense to Twilight fans...just not my cup of tea. :)

The roses on the outer pockets are chip pieces as well as the "sparkle" tag. I added pretty bling scrolls and punched two small hearts under both roses with a $1 punch from Michael's.

The double hearts were a gift from another pocket pal and the little red cupid (middle pocket) was punched from red glitter paper. More glitter thicker alpha's spell out "xo" and the final touch was to spell out "mine" with the red glitter alpha's.

For the next letter I continued with a black, red and white theme. It went to my pal Glenda in Florida and we're regular swap partners. 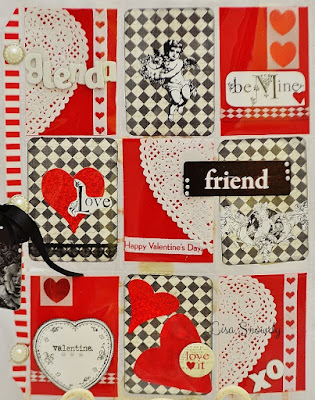 I'm fond of diamonds (as you can tell) and enjoyed using this dp to contrast with the red flocked paper. Ribbons, trim, doilies, stamping and die cuts brought this pocket letter together.

I used glitter thicker alpha's to spell her name and cut a heart doily and attached it to her greeting pocket. The middle and far right pocket both have stamped images from Graphic 45 and I added ribbon to both outer pockets.

More stamped images (click to enlarge), a chipboard piece from the collection I used on the prior pl, another heart doily and more ribbon / trim.

The pretty heart on the left is a stamped image by G45 and I stamped "valentine" by Verve Stamps on it. The middle pocket has two die cut hearts by Verve and a flair button by Prima. The other pocket has a heart doily with ribbon and "xo" glitter thicker alpha's. So happy Glenda likes her pl!

The next pocket letter continues the same color scheme and it was for a group swap at PLP's. Happy to have a new pal, Nori, in Massachusetts. We had to include fabric (which could include paper / trim / ribbon) and mixed media on our Valentine-Fabric w/Mixed Media pocket letters. 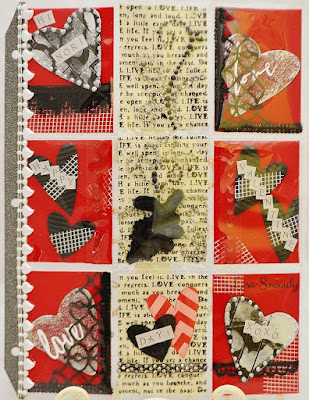 For the fabric I used a flocked paper (red) and a canvas print. I brought the mixed media in with embossing paste, micro beads, a fun technique by Tim Holtz, liquid acrylic paints and drywall tape.

I used Tim's foil tape embossing technique on the far left heart. A band of drywall tape was added to the bottom with black lace and I spelled out her greeting with Authentique alpha's. The middle pocket is canvas print and it has text on it so I didn't want to cover that up therefore a simple bling treatment was all it needed. The far right pocket has a die cut heart which received a layer of silver embossing paste and then a coat of micro beads for more texture. I die cut Tim's lattice corner and "love" and added to my pocket. The black trim finishes it off.
Note: You can purchase drywall tape at any Lowe's / Home Depot or hardware store.

(sorry for the glare, you can click to enlarge and hopefully see it better.)
I die cut corrugated black hearts for the outer pockets and added drywall tape for some texture. The Prima bling continues on the middle canvas pocket. I spelled out "Happy" and "Valentine" with the same alpha's by Authentique.

I did the same thing in reverse for the two other pockets as I did on the first row. The middle pocket has two die cut hearts, one from black corrugated paper and the other is from a resist paper pack by Heidi Swapp. A pretty band of black trim with gems add sparkle and I finished my Valentine greeting on the the small heart. So happy Nori likes her pl and that we're going to swap again!

My final Valentine pocket letter is for my pal Mary in Florida. We are regular swap partners and for this one I went with a clean and simple look. 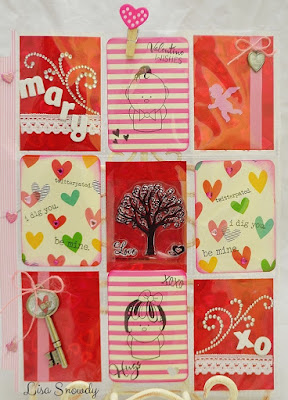 The glare made this one difficult to photograph but hopefully you can click on each image to see the pockets better. The red dp is actually a metallic paper with heart images and love the way it shimmers.

More glitter thicker alpha's to spell her name, pretty white lace trim and a swirl bling on the left outer pocket. For the middle pocket I stamped images by Verve Stamps. The far right pocket includes a punched cupid image, pink ribbon and a heart charm by Tim Holtz.

I tucked an acrylic stamp set for her in the middle pocket and stamped sentiments by Verve Stamps on the outer pockets.

A key charm by Tim was added to the left pocket, more stamped images from Verve's Twitterpated Stamp Set and a mirror image of the greeting pocket on the far right pocket.

This wraps my Valentine pocket letters for 2016. If you're interested in learning more about pocket letters and how to sign up to become a Pocket Letter Pal visit the founder's blog - Janette Lane. She began pl's in January of 2015 and launched the PLP's website two months later. It grew exponentially last year and it's such a fun way to meet new people around the globe. I'll be sharing all of my incoming pocket letters at the end of the month. Have I said how much fun it is to receive happy mail? It's awesome, thanks pals!!!

Wishing you a very Happy Valentine's Day, wherever you are.
Lisa
xoxo

Posted by Adventures in Paperland at 4:25 PM 6 comments: