Art From the Heart, Part I 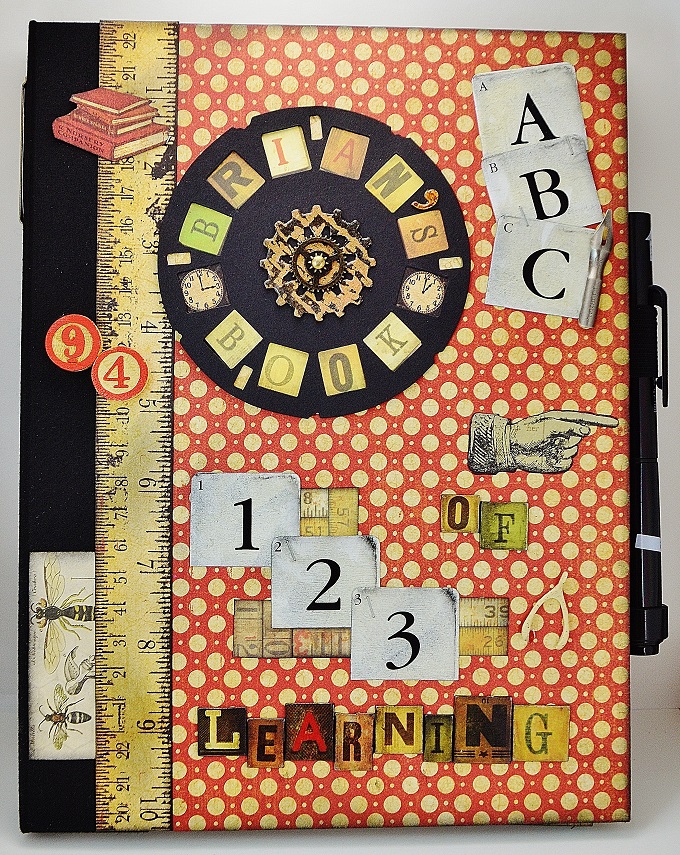 I'm back today to share an altered book I made to record my son's K-12 learning years. A few years ago, I purchased several SMASH books and never had the time to doing anything with them except alter the cover of one book. These days I have more time to devote to projects which I like to call art from the heart because they are created for someone that's special to me. I'm in the process of making one for each of my children and for the purpose of getting at least one entered into the second challenge I'm entering my son's today. Here's a photo of both books before the altering process began. 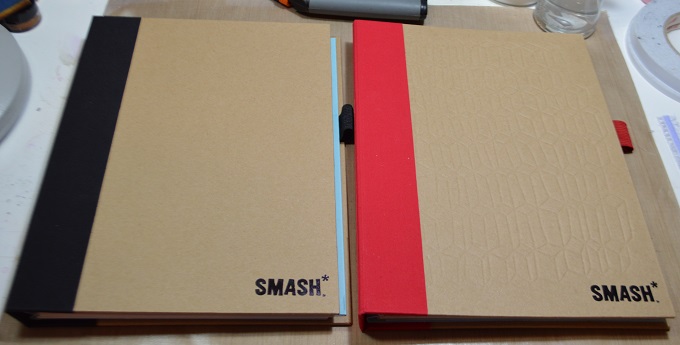 {his is on the left and it's the mod style book}

My altered book was motivated by the following challenges-
eclectic Paperie's ePlay Challenge-Alter a Book!
A Vintage Journey Challenge #2-Say It With Words!

For the second challenge {hosted by the talented Alison Bomber} I spelled my title out with Tim's letters. A Vintage Journey challenge is heavily influenced by all things Tim Holtz so I've used several  of his products and I'll list them at the end of this post. For now here are a few close ups of the front cover and the inside jackets-front and back. 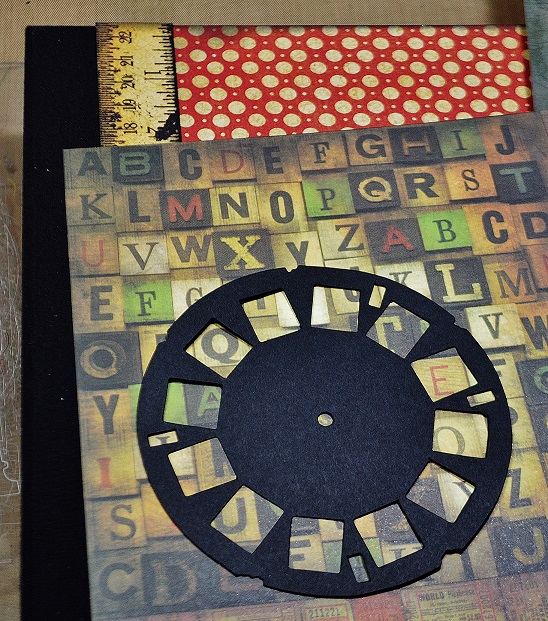 Tim's Picture Wheel die reminds me of a viewmaster and since my
son loved those as a child I used it on his book. :)
{the letters were fussy cut from one of his paper pads and
glued to the back} 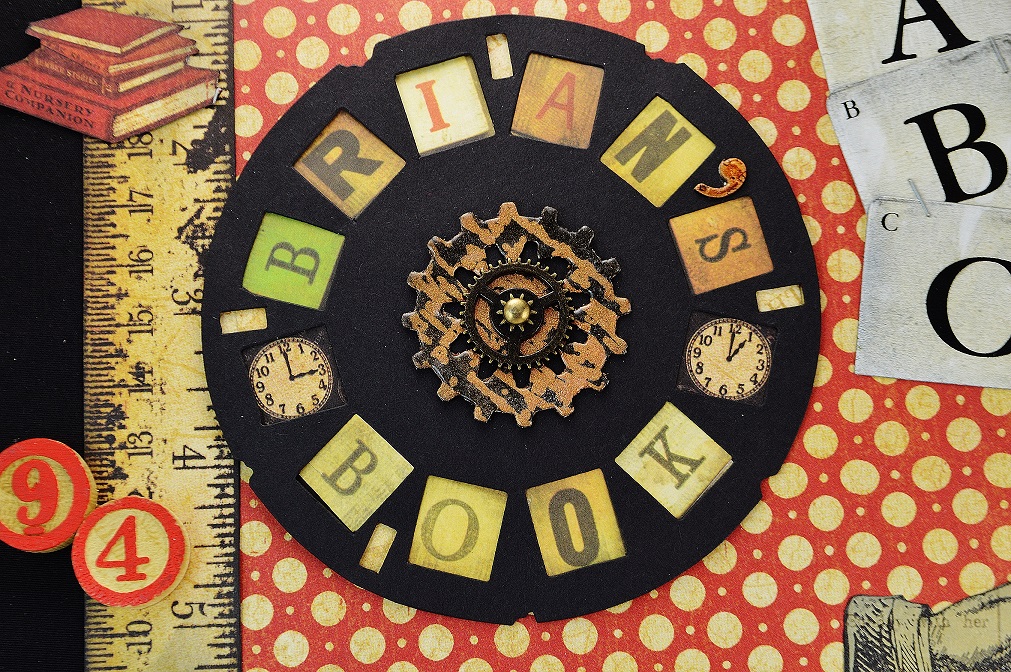 {see the large cog in the center}
I used the glittered glass tutorial  to create this look.
It was die cut from Tim's grunge paper which you can find here. 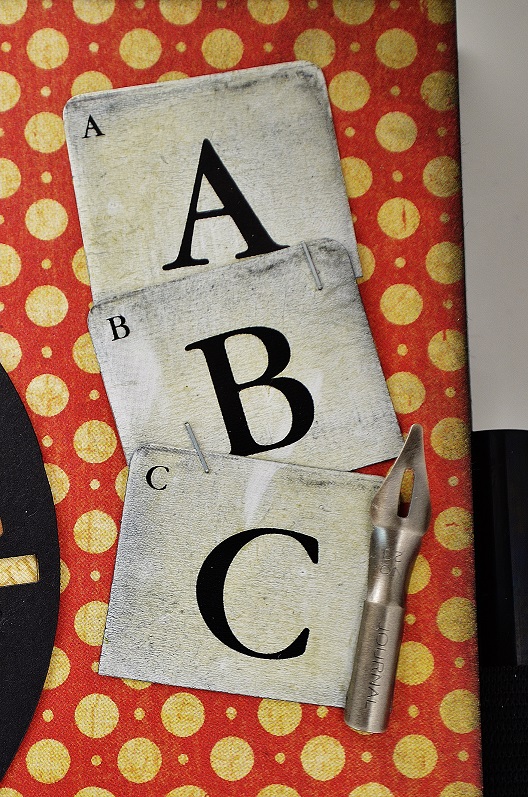 My son was big into magic and cards as a
child so had to include some on my cover. 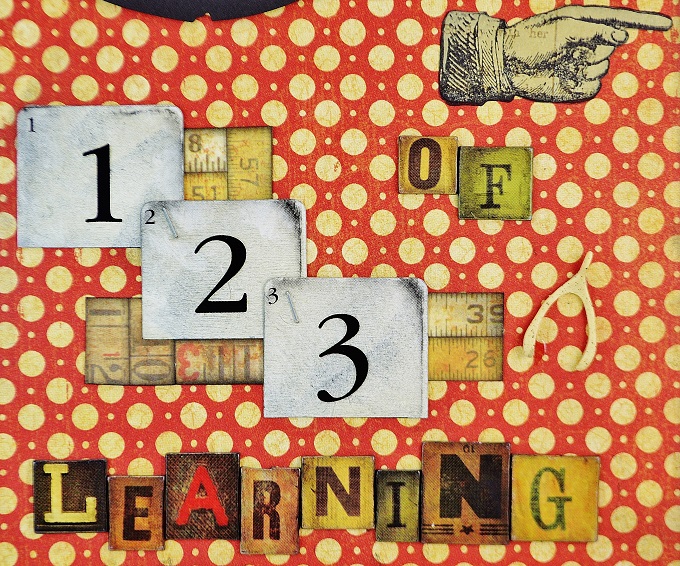 I used Tim's alpha tiles to finish my title and I fussy cut some rulers
from one of his paper pads and tucked under the alpha cards.
The hand stamp is from the S.A. Steampunk
set and I love the little Idea-o-logy wishbone. :) 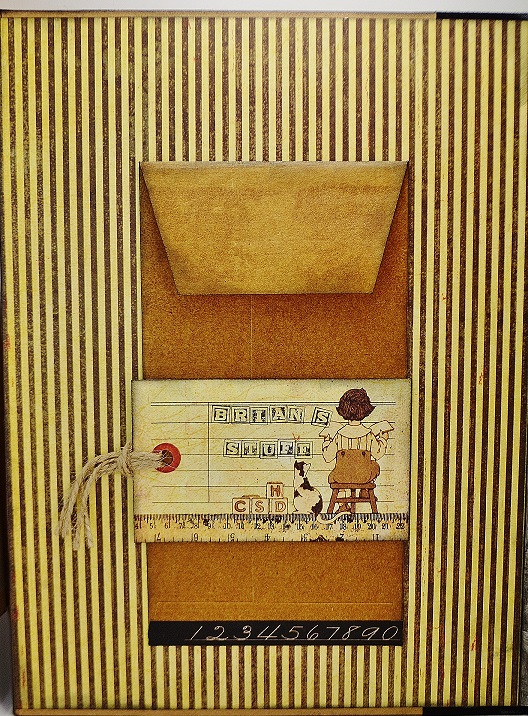 On the inside front left cover I added this striped
paper and an Idea-o-logy kraft glassine pocket to
hold tickets, etc.
The tag-on the tag- is a cut out from G45 and I tied it
off with Tim's jute string. I used Studio g alpha's to spell
out Brian's Stuff. 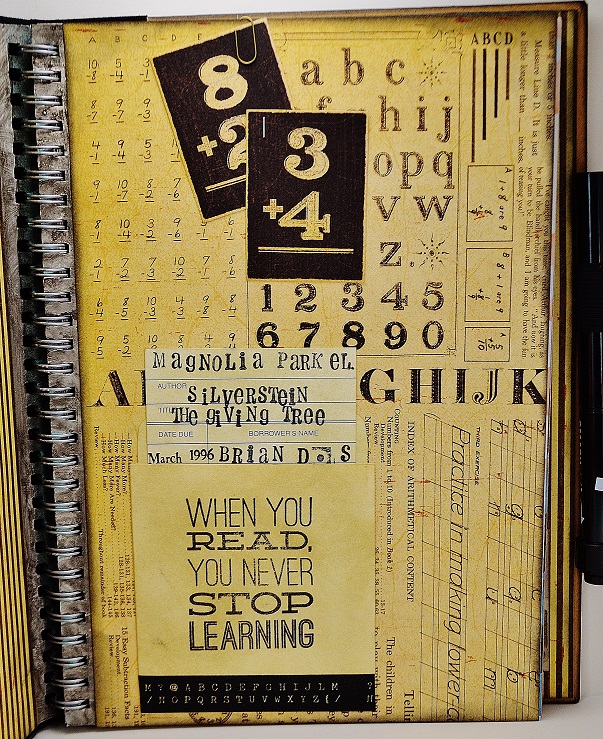 This is the page to the right of the inside front cover.
I added a library pocket and card which was
distressed with Antique Linen Distress Ink.
The quote is from My Favorite Things and
I added alpha washi tape at the bottom.
{click to enlarge picture} 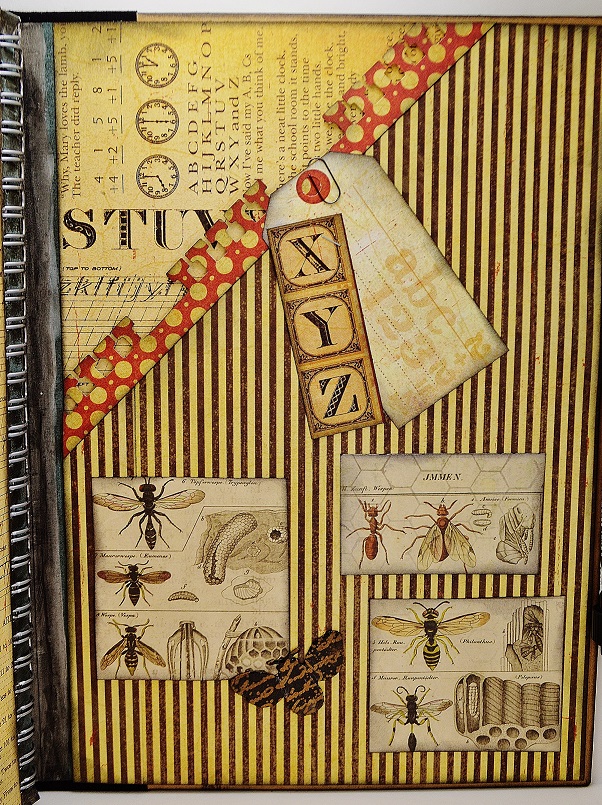 This is the inside back cover and I cut out bug
specimen photos from one of Tim's paper pads.
Every boy loves bugs, right. :) 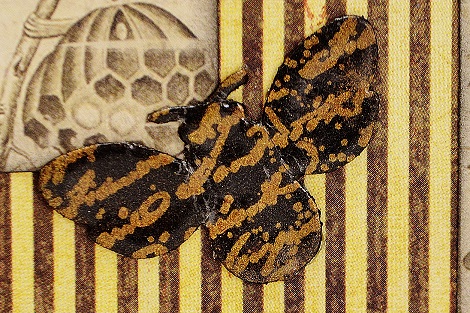 The bee was die cut from grunge paper and again
I used the glittered glass technique {see link above}.

{the front cover again, in case you forgot what it looked like lol}

Graphic 45's ABC Primer 12x12 paper was used to cover the front and inside jackets and several cut-outs from the paper collection were also used. Each page and element was distressed with Black Soot Distress Ink and adhered with X-Pressit double stick tape for a smooth look.

Whew, I think that's it!

I decided to join along in these challenges too!
Craft My Life All Crafts Challenge February/March
Artistic Inspirations Challenge #84-Anything Goes

Edited:
I'm a Pinworthy Mention at A Vintage Journey 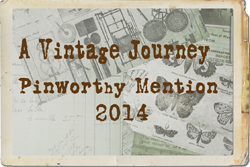 Thanks for looking and hanging in there!
Have a fantastic day. :)

Would it be too much to say that this book looks 'smashing?' I saw you pin that tutorial and wondered what your clever brain was up to and now I see! I am so happy you are finding time to craft for YOU and well, memories for the kiddos. :) This is FABULOUS L1! Incredibly inspiring.
L2 xx

Lisa, this is just Fantastic! LOVE the viewmaster detail with Brian's name and all of the other details you added with fond memories of him! THX for playing with us at the eclectic Paperie ePlay Challenge!

Wow Lisa! What a fabulous vintage project! Love all the details!

Lisa M already said it..but I think it is smashing book too Lisa..love all the details and the view master is fabulous.

Hi Lisa. You've done such a great job of altering this smash book into a vintage "Tim style" work of art. Nice use of so many Tim elements! I really like what you did with the picture wheel die on the front of your book...very clever. Thanks so much for sharing your work with us at A Vintage Journey. <3 Candy

I am just in awe at how you just throw a bunch of stuff together and it turns out awesome! HOW is that?! I love everything about this project - the colours, the itty bitty bits of paper...everything!
hugs, Asha

This is absolutely delicious, LIsa - I love the bold, funky look, and all the beautiful papers and ephemera and quotes and lettering that you've put together. The letters in the picture wheel are a brilliant touch, and I love the page with the library pocket and the reading quote - so, so true! Thanks so much for joining us on A Vintage Journey.
Alison xx

What a lovely smash book! ~Diane

I have to agree with L2, quite 'smashing'!! Your use of the viewmaster and letter paper is genius and I love all of the embellishments too! My favorite thing has to be the library pocket with the Shel Silverstein card in it!

Forgot to say - yes, Neil Diamond - genius!! And I'm not ashamed to say so (which some people would be in the UK - for some reason he's regarded as rather uncool... though less so, I think, after his more recent "revival" albums). That voice...
Alison xx

Hi Lisa a great smash book it has so much detail. Thankyou for joining our challenge this week at Artistic Inspirations.
Good luck
Fiona dt. x

Lisa, this is such a fabulous creation. I love how you used the photo wheel along with all the other fun element! Thank you for sharing your altered book with us at A Vintage Journey.

This is really beautiful. Caught my eye and had to come and take a closer look!
Thank you for joining us at Artistic Inspirations!

Just popping by to visit while on holiday! What a great personal gift for your son, a fab decorated keepsake!

So beautiful Lisa, what a fantastic treasured possesion this is going to be...loooove it!
So happy you joined us over at eclectic Paperie, good luck.
Big hugs
Tracy xxxx