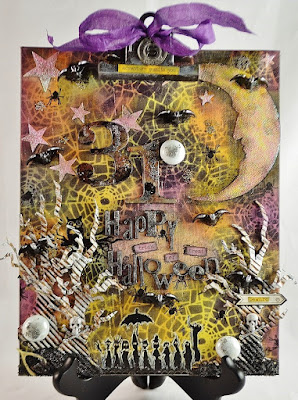 I know it's a wee bit early possibly for a Halloween project. Perhaps it was a subliminal thing, it has been "hotter than blue blazes" and maybe I was wishing of cooler temps or perhaps I was thinking of Tim. He loves Halloween and consequently he designed a lot of fun stuff for us to play with. Who knows??? Sometimes you just gotta go with it.

I've been out of the CC3C loop for the past 5 challenges. Now sure how that happened (yes I do, real life stuff) but I'm back to play along with the final two. This one is all about altered surfaces and the technique can be found on pg. 45 of Tim's Compendium of Curiosities III book.

I chose to alter two numbers from Tim's Idea-ology Alpha Parts, Numeric Words and Numbers, using the technique in the book. Micro beads were added because I like them. :)
See that bat? Well he started all of this, I found him on my craft room floor (don't ask) and before I knew it, I had bats everywhere lol. 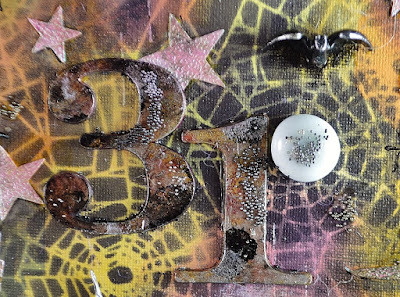 You can see Tim's Shattered stencil on display in this photo.
I blended Archival Jet Black ink through the Shattered stencil over my canvas to build the the base layer. After it dried I came back with Distress Inks-Black Soot, Seedless Preserves, Spiced Marmalade, Mustard Seed, Squeezed Lemonade-and blended the colors randomly over the stenciled area. 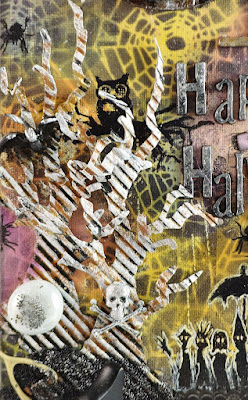 I'm totally into texture these days and the more the better. With that in mind I die cut my branch tree with black corrugated paper and gave each one several coats of gesso and distress paints. Bent branches add more dimension and hide various spooky creatures. 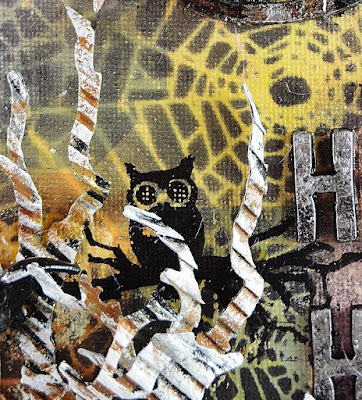 Like the owl hiding behind the branches. He's from Tim's Mini Halloween stamp set and because we have an owl living on the lot next to ours I wanted to include him. It's a bit spooky at night to take the dog out and hear him hooting. She's snack size for him and I don't want to wrestle an owl over my dog, but I will! 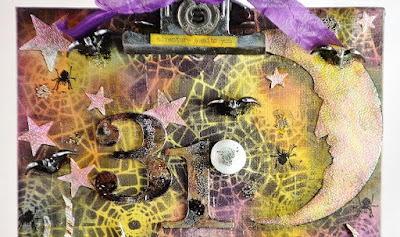 The moon and stars were die cut from Tim's Crescent Moon and Stars die with iridescent paper. Distress inks were rubbed over the surface so the texture of the paper would pop out. I did add some shading with a black Faber-Castell Pitt Pen.

The trick or treaters (aren't they fun!) are also from Tim's Mini Halloween set and were stamped in Archival Jet Black Ink because it's permanent ink. I outlined each one with a Uniball Signo white gel pen for some definition. The Skull and Cross Bones metal elements were altered with gesso and Black Soot Distress Ink. They're from Tim's Idea-ology line as well as the Wishbone in the lower left corner. The white marbles are from my stash and I added micro beads to the top of each. If you enlarge the photo you'll be able to see the micro beads I added to the base of my trees. I'm kinda hung up on these things right now. ;)

Tim's Clipboard Clip will serve as the hanger for my canvas and it was altered with Brushed Pewter and Black Soot Distress Paints. I used strong adhesive glue and two long fasteners to anchor it in place. A Halloween token was altered with the same paint and glued in place with Glossy Accents. To finish I blended Spiced Marmalade Distress Ink over a 2015 Small Talk Stickers word strip by Tim, placed it on the clip and added a purple ribbon from my stash. 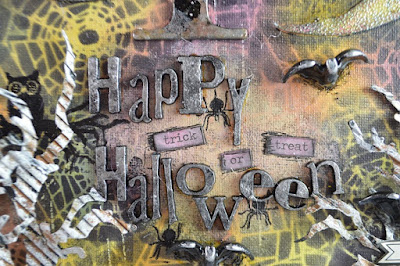 I love the lettering of Tim's Ransom alpha's and to highlight the letters I added a touch of Brushed Pewter Distress paint. Seasonal Chit Chat stickers, trick or treat, were altered with Seedless Preserves Distress Ink and a black Uniball gel pen. You can see the spiders I stamped, also from the Mini Halloween set, and the black glass bats from my stash. After they were glued with 3D Matte Gel I added a touch of the Brushed Pewter DP to the end of each one to highlight.

This was such a fun project to create and even though I truly had no intention of making a Halloween canvas, I'm glad I did. My daughter loves it and has already claimed it for her holiday decorating this fall.

The Inspiration Emporium sponsored this challenge. Thanks I. E.!

I hope to be back later today with my second project from my class with Finnabair (still editing photos). It may have to wait until Monday because my hubby wants to travel to visit our friend who was in an auto accident earlier this week. He was airlifted to Memphis on Monday morning and was cleared for visitors this morning. It'll be a short and sweet visit I'm sure but I think he wants to see for himself that his friend is going to be okay. A big thank you to all of you who've said a prayer for him and his family! One thing is for certain, you never know what each day will bring in this life so let's make them count.

Have a great weekend everyone, wherever you are. :)
Lisa xx

Hello Halloween! WOW...so much to see on this...a treat at every look! LOVE the pieces you added and the altered letters! Great color too! Thanks so much for playing along with us at CC3C!!!

How fun is this - I keep looking at it an seeing new things!

Oh my gosh, Lisa!!! This is over the top cool! I LOVE THIS! Great job of using the altered surfaces, too!! Thanks for sharing this beauty with all of us at CC3C.

This is SPOOKY fun!! What a great collage and excellent use of the altered surfaces tech. You always do such a great job, girlie!

This is so spooky and cool! There are so many interesting details on here, with colors, patterns and textures, I'm admiring the result and trying to take it all in.

What a fun spooky Halloween piece! Your altered surfaces are fabulous! Thanks for sharing with us at CC3C!

Beyond funky! Love your spooky Halloween take on the Altered Surfaces theme - what an amazing canvas, Lisa. The effect on those numbers is totally cool!
Alison xx

Welcome back to the challenge!! So happy you did, because this totally ROCKS!! I love Halloween and I've been sitting here for over ten minutes studying your creation and all the wonderful texture and details. So inspiring!